Yiwu is a commercial city 300 kilometers southwest of Shanghai in East of China an Zhejiang province. Yiwu is known as the greatest city of wholesales. We can say that most of the great merchants have seen this city or have bought something from Yiwu OR they know this city well. Yiwu is famous for its lively and consuming markets and it is not possible not to find what you want in Yiwu markets. Yiwu is among 100 biggest markets of China and country’s economy leaders and it is renowned for its diversity, quality and affordability. This city ranked first in last six years in small consuming market in China.

The streets used to be very dirty and intolerable but now it is a place for luxury cars, buildings and markets. Like Shenzhen, this city’s economy had a fastest growing rates in the country after opening the Chinese markets to the world. In past 15 years, the number of Arab merchants raised in the city so many Arabs and Muslims tend to travel to this city and they build many mosques and restaurants. Statistics show that there are 14000 foreign businessmen living in this city and 210000 people are visiting the city daily which is very significant. Halal food, bread and Kebab is vast in this city and it is a very good place for Muslim to live and stay. Yiwu is small in terms of urban areas but it has many nun-urban areas scattered around the city. Yiwu has 1.2 million population and most of them are buying, selling and trading.

Yiwu rail link to Madrid is the longest railroad which connect China to central Asia and Europe with 8111 miles railroad. There are a good infrastructures in this city for freight and passenger transportation. The Yiwu’s railway station is connected to most of the China’s cities and many trains enter and exit this city daily. Yiwu’s airport is one the most active airports of the area and it receives daily flights form cities of China. In addition, there is no problem for shipping eto/from this city because this city is near to some large ports including Shanghai.

Business is a large part of Yiwu’s history. People have been spending their time buying and selling because of pore soil in that area.

This business continued for many years until Republic of China announced their existence in 1949, as long as free marked was introduced as a sign of capitalism in Chinese society and trade was banned, Tiwu people had to trade secretly. After China’s economy reforms by Tien Shioping in 1978, Yiwu’s trade market reborn and tend to be the best free market of China. Due to these economic attractions, Tiwu rated 47 in 100 top cities of China in 1988. In that year Yiwu introduced as the economic city of Zhejiang province and Tiwu rates 19th in 2001 for economic ranks in China.

Yiwu located 100 kilometers south of beautiful Hangzhou city of Zhejiang province and nearest city to Yiwu is Dongyang. The average temperature of this city is 17 degrees Celsius and the warmwst month of this city is July with 29 degrees, the coldest month is January with 4 degrees and most of the time this city is warm and humid.Yiwu surrounded by mountains from three sides and it has about 1100 square kilometers area with beautiful park and Xiuhu lake and Songpu forest which which has seen many poets and astronomers in the past. Martial arts are flourishing in this city and it has Wu opera hall which has been made in Ming dynasty in 400 years ago.

One of the most important and commercial attractions of Yiwu city, which is the major feature of Tiwu, is largest market in China and all over the world. The Futian market or the Yiwu market or the Yiwu international trade city is the market which you see in the picture. (see the relevant page for more useful information about this market.) 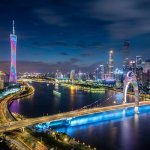